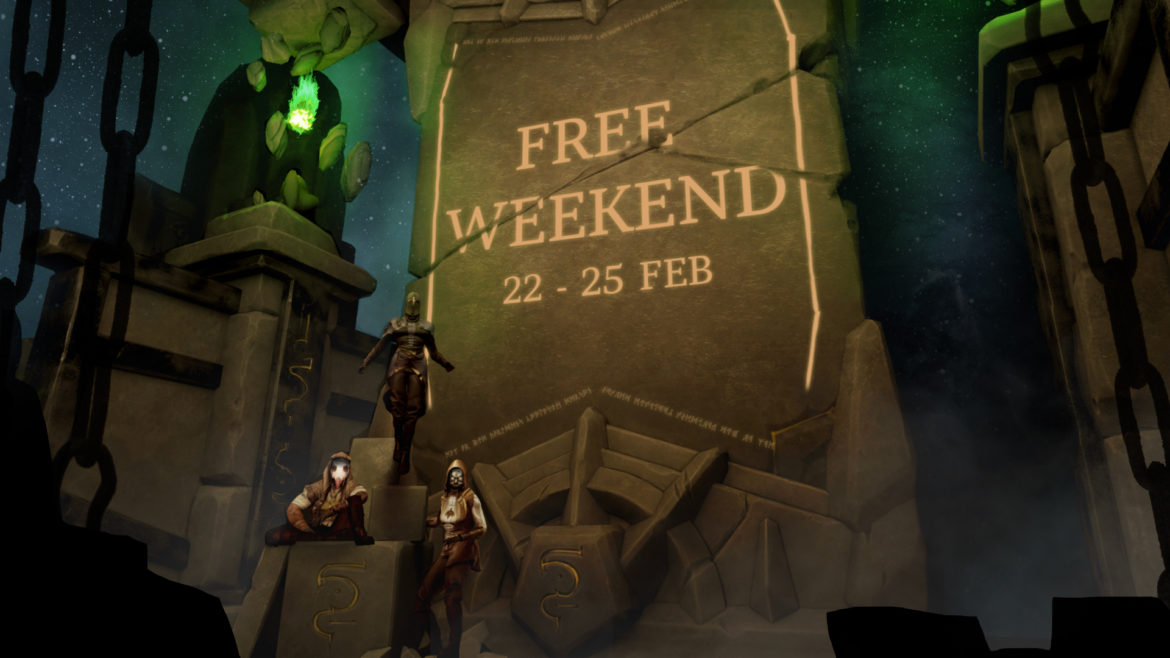 Try Wands for free this weekend!

Not even a day has passed since the launch of Patch 1.3.6 and we can already reveal our next Wands treat! Join the Free Weekend on Gear VR and Oculus Rift today and test out the new dynamic environments, spells and more. Dynamic environments, in-game events and new spells are only a few of the things included in Patch 1.3.6. Read more about this update Patch 1.3.6 Read more about Survival including information on The Hulk & The Arcer below!

We’ve sat down with Tech Lead, Hannes Lidbeck from Cortopia Studios, to get a deeper insight and understanding of what it’s like working in the VR/AR industry! Enjoy this monthly Spotlight which will feature different roles, perspectives, tips & tricks and more!

Oh, hi Marc! To quote the 2014 motion picture ‘The Lego Movie’, everything is awesome.

I think we’d all be very interested to hear how you initially ended up at Cortopia and what you do?
I was hired as a software engineer at a company called Univrses, tasked with building a magic dueling game demo to show off their inside out positional tracking software. After a couple of months it became apparent that me and Petter (lead tech artist) was way ahead with the demo schedule wise, so a decision was made to turn the demo into a full game. Wands was then released under a newly formed company called NUX Studios, that later became Cortopia Studios and here I am. Oh, and I’m currently tech lead.

What drove you to become a programmer?
I’m still not comfortable calling myself a programmer since I basically only do scripting work, but my amazing coworkers at least allow me to proudly say I’m part of a programming team. Education wise I went to Futuregames in Stockholm which is a vocational school for Game Design and 3d Graphics. There were two basic directions for the design class, scripting or level design. I found the latter to be too damn hard, while scripting was super fun. So kind of coincidental I guess, but I have no regrets about my decision.

So tell us, how does a regular day in the life of a tech lead look like? Please start from the very first thing you do in the morning to the last in the evening!

Check email, scroll through discord, re-prioritize work if something critical has shown up at Jira, make sure everyone in the team has a task, review eventual pull requests on git,  daily stand-up and then hopefully some hands on work. As tech lead I also attend a bunch of meetings and help remove impediments for my co-workers. Being situated in Sweden means when my work day ends, most of our partners are just arriving to work, so I usually end my day the same way I start it, by checking my email.

Diving a bit deeper into coding, can you tell us about some of the software you use and why?

We use Unity due to its accessibility and flexibility. Both me and Petter had experience working with it before so it was a natural decision. Ever since Unity added the option to download Visual Studio together with the engine, I’ve been using it as code editor.

What are some of the challenges you face on a day to day basis?

We have a lot of ambition which is great, but it also means we have to twist and turn time sometimes to make our schedule work. Unforeseen events such as disease or other types of absence of team members is always a bummer, since it might lead to a feature being delayed. Support is definitely a huge challenge as well, especially when we receive bug reports that we can’t reproduce. Luckily we get really good support from our Q&A team and our community.

What are you most and also least proud of having put into this world?

If we keep it to game development I think my least proud moment would have to be my first game project at Futuregames. My group made a game where you would take turns shooting endangered animals and watch out for cannibals, not sure how we ended up with that. I am of course most proud of Wands.

Speaking of Wands, how has the whole experience been, bringing a game from ground zero to now being one of the biggest competitive games on VR?

It has been a great experience overall but it hasn’t been problem free. The balance between supporting, porting and developing new content has been rough, especially when I was alone on the programming side. Looking back at my personal journey and what I have achieved though, it has definitely been worth it.

You mention porting Wands to different platforms, what has it been like working with this many partners?

Every partner we’ve worked with so far have been very supportive, which made our work a whole lot easier. The fact that they continue to support us even after the game has launched says a lot about their commitment as well.

Sounds great. What kind of projects or features are you working on right now, anything you can share?

Personally I’m doing the least sexy type of work right now which is maintenance, i.e. fixing bugs, balance work and doing general improvements to systems already in place. Basically filling in the cracks of our foundation to help my co-workers build new awesome features. I’m happy to say we’re finally at a point where we can develop Wands further and not just support it, so prepare yourself for a wondrous spring.

Thanks a lot, Hannes! Do you have any last advice to give for newcomers trying to break into this field?

Be humble, fail fast and learn from it, Google is your best friend.

Tuesday, December 19th marks a big day for all Wands players! Not only is Wands from today available through Steam for both Oculus Rift and HTC Vive, but a major patch update brings forth big features long awaited by its dedicated community. The team at Cortopia Studios have been hard at work to make sure your Christmas holidays are packed with new content and a major update on balance issues and bugs. Enjoy patch 1.3.4 and all the new features it brings!

Wands is now available on Steam!! Game balancing
-Chaos Leap will no longer avoid compromised tiles and it will no longer show the purple trail
-Devil’s Spit now accelerates when airborne to double its original speed
-Reduced Lightning Strike’s charge time from 2 to 1.5 seconds
-Flaming Phoenix
–Reduced mana cost from 45 to 25
–Changed damage range from 16-60 to 10-25
-Dragon’s Breath
–Increased range from 15 to 25 meters
–Changed damage range from 8-22 to 10-20 per second
–Increased flame speed
–Improved hit detection

Bug fixes
-Lightning Strike now damages your opponent
-Fixed visual issue with Dragon’s Breath on Temple of Ophidian
-Fixed issue where Chaos Leap would stop working after trying to cast it without enough mana
-Match will now proceed properly to Lobby if match ends in draw
-The remaining player can now retrieve pickups as intended after two players tried to enter the same tile
-Exploration no longer counts as a match, you won’t take damage and it won’t end after 3.5 minutes
-Fixed issue where game would crash if trying to bring up menu in Lobby on Daydream
-Repaired sound effects for the trains on Ortus Station
-Improved recovery on connection failed in the Workshop

What’s Next In Wands?

Releasing Wands was an exhilarating experience, but we knew the journey didn’t end there – we were just getting started! As we at Cortopia are working hard on making Wands everything it can and needs to be, we have quite some grand plans to share with you. With your invaluable feedback, the game has seen some major improvements over the last 15 months and now we’re ready to share what we are working on for the future!

You shouted and we listened! We are playing around with a new game mode: Survival, so you’ll always have someone (or something) to battle. If you ever again find yourself in the queue, waiting for your next opponent to enter, you’ll have the option to enter Survival Mode. Several different kinds of enemies will spawn during your wait. How long can you survive?

The Wardrobe in Wands has been on our list of things to improve. It has taken much consideration, but we’re excited to finally share that a complete overhaul is in the works. We’re extending your visual experience by adding a new Wardrobe room. It’ll be more immersive, and with focus on visual distinctiveness. By doing so, we’ve also had to do a total revamp of the mechanics and presentation of vanity items in Wands. We’re also improving the quality and distinctiveness of items to make sure you really stand out when you are facing your opponent. And to top it all off, there will be more frequent updates, and new items will be added to the game on a consistent basis. Get ready to experience your Wielder and customisation like never before!

Why are we doing all of this?

The VR experience is one of the most unique one can get in gaming. Your usual game will last between 2-10 hours and once complete you’ll move on to your next experience. Whilst this way of gaming is definitely fun and something everyone can enjoy, we want Wands to be different. Some Wands players have been enjoying the game for over a year, and we think the above changes will allow even more players to do the same. We want Wands to set itself apart with features that provide replay value, such as seasonal leaderboards, content updates, and frequent balancing patches. In order for this to happen, the Cortopia team must work around the clock to keep the game fresh. We believe that if someone cares enough to write a review or provide feedback, we should pay attention. Your feedback has been incredibly important, and we’ve taken it to heart. We’ll be implementing the above changes and improvements (plus a few more) over the next six months, and we can’t wait for you to experience them yourselves!

– Cortopia
Login to Cortopia Studios
Reset Password
Enter the username or e-mail you used in your profile. A password reset link will be sent to you by email.
Already have an account? Login